By Amy - June 02, 2014
What a great day to celebrate Gia Chunyu's 8th birthday! I'm sure that many of you are wondering: Is today the ACTUAL day that she was born, or is it just a close guess?

Well, here's our view. We believe that God handpicked this little girl for us and us for her. Therefore, we believe that He gave wisdom to the doctors at the orphanage who decided how old she was when she was found and when her birthday was. So, we believe that, YES, this is the ACTUAL day that she was born 8 years ago. :)

Her friend, Pei Pei, from the same orphanage, also has a birthday today...he's 6. We celebrated together, on and off, all day. 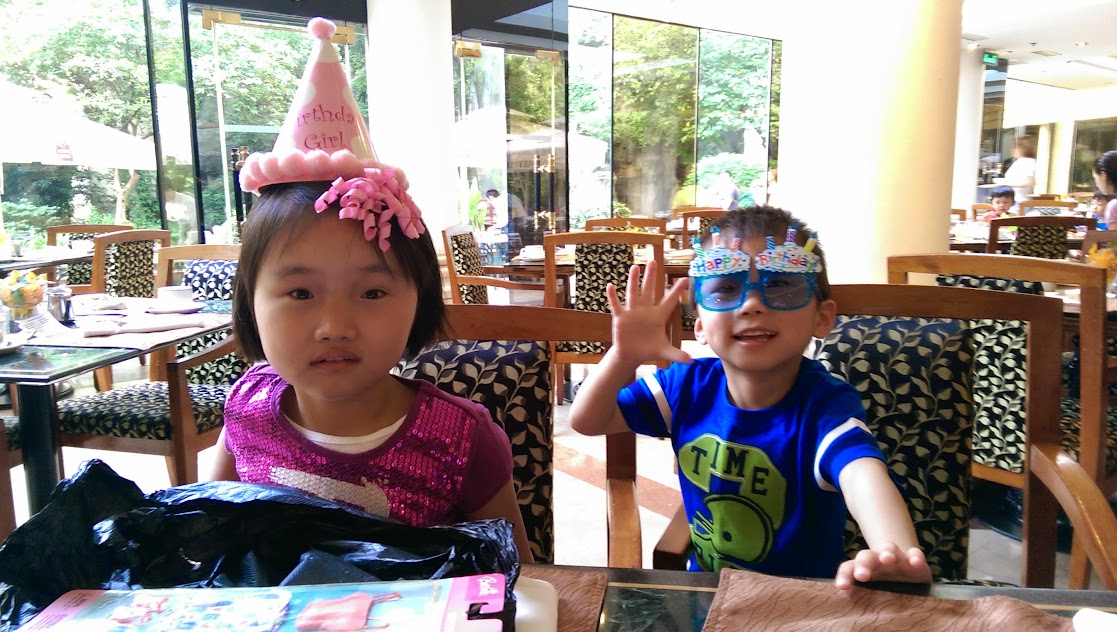 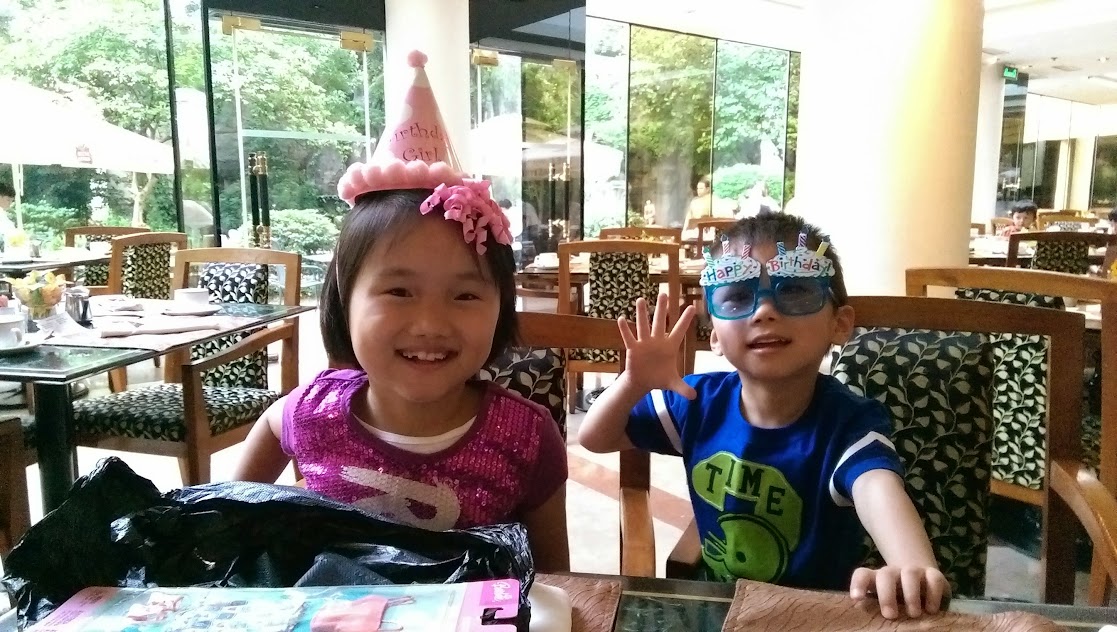 After breakfast, we boarded a bus for a beautiful park, where most of the families traveling with us got our group picture taken. The only problem? It was about 37* C (98+ F) today. Factor in the humidity, and most of us were DYING. And, we had to climb 99 stairs to get to the picture-taking place. WHEW. Take HOT and WET and multiply by 1 MILLION, and you might have an idea of what we were feeling. LOL 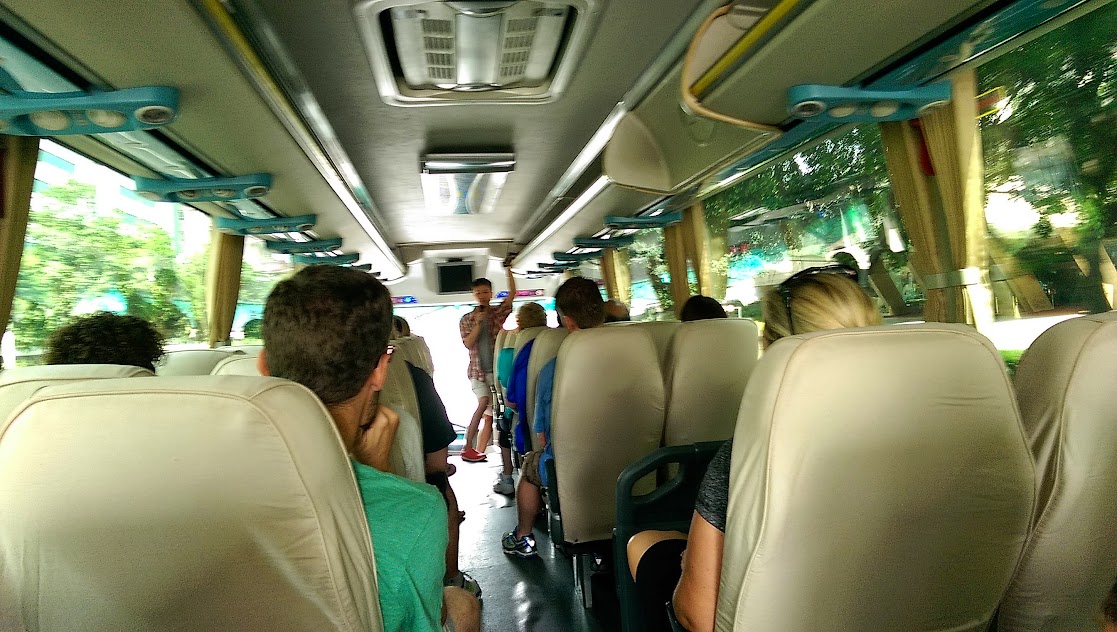 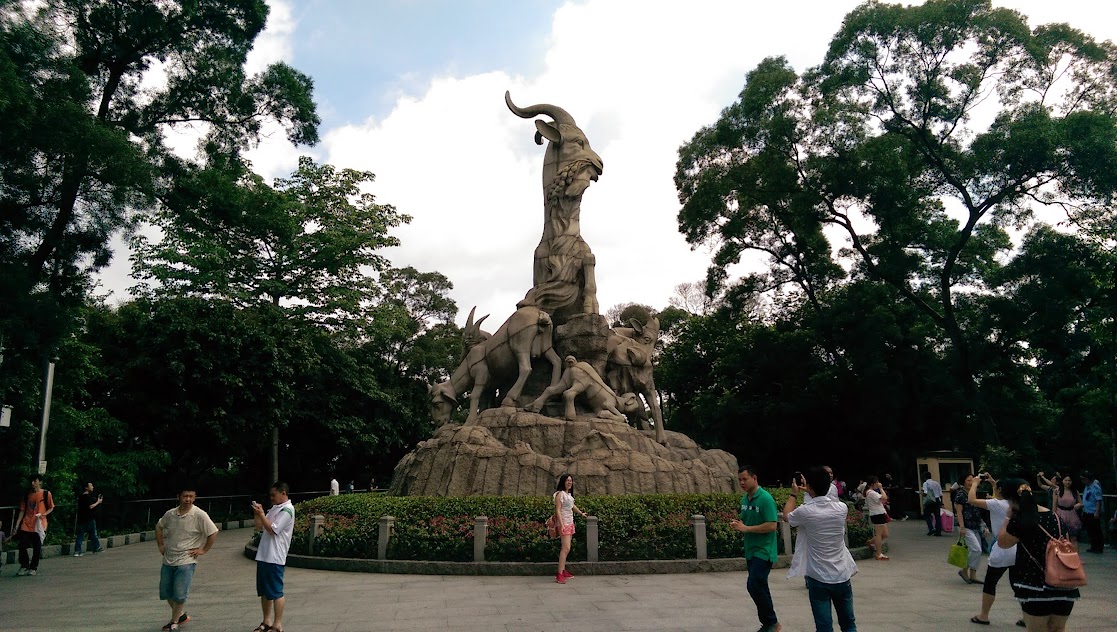 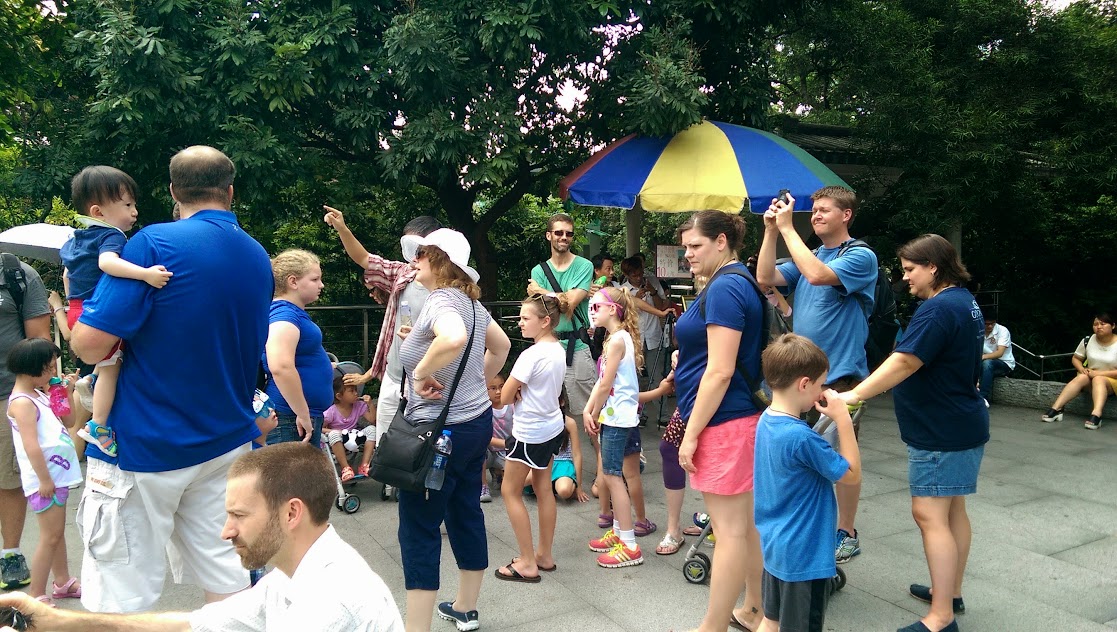 After the group picture, our guide Simon (whom some of you might know from watching the Little Couple--he was their in-country guide when they came to China to adopt Will) took us to another part of the park where many people were playing a form of hacky-sack. Simon (my Simon) got in on a game, and 2 of the Gs did too. 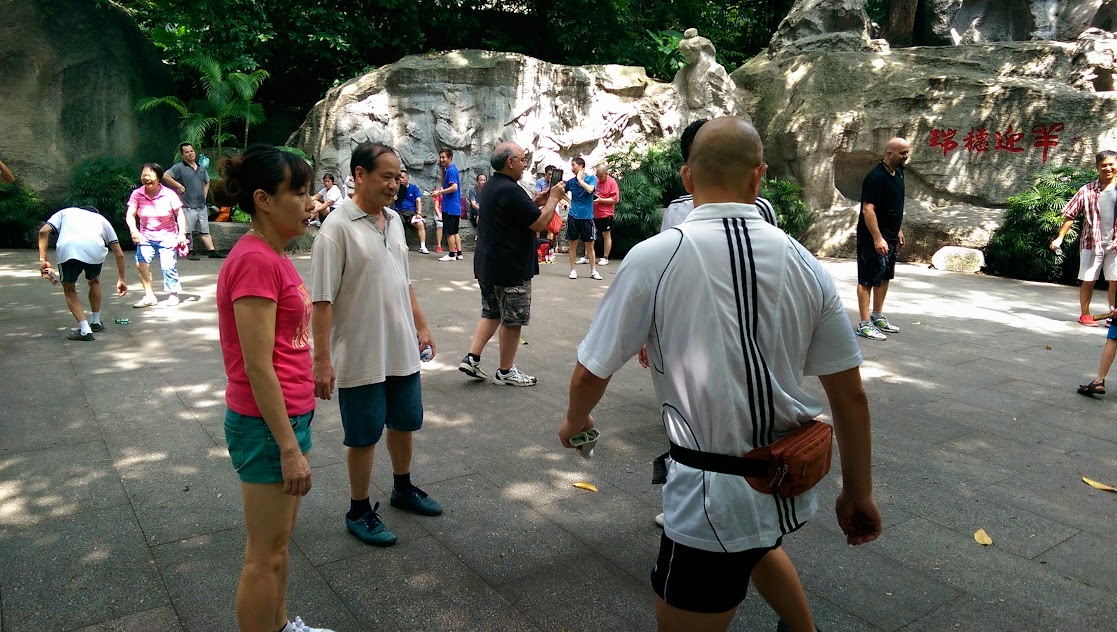 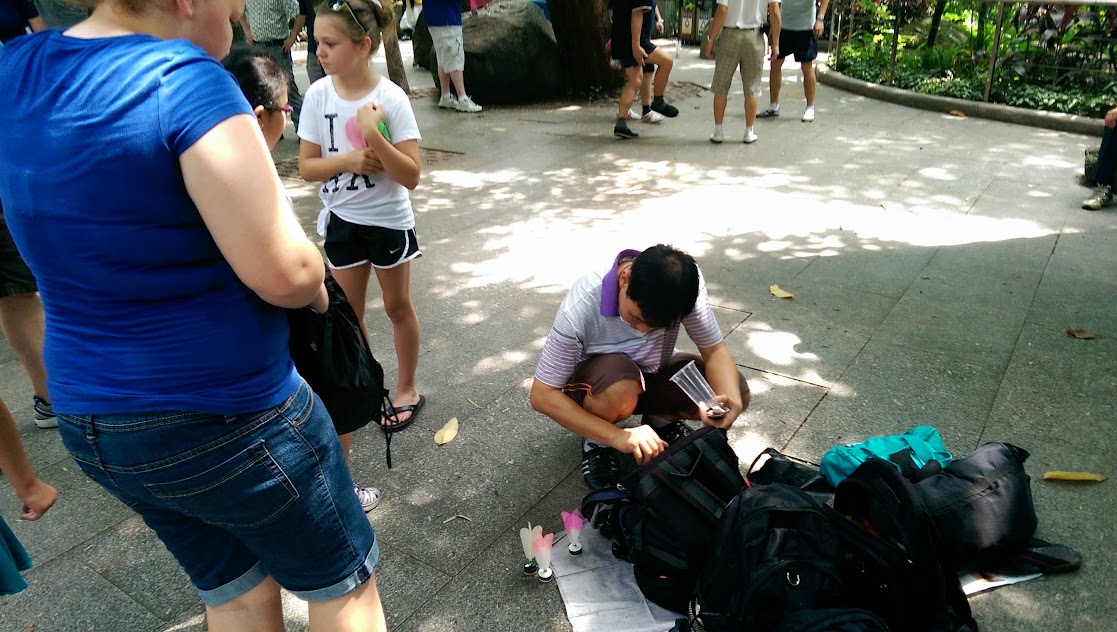 Then we were back on the bus bound for Shamian Island. This is an island in the middle of Guangzhou where ALL American adoptive families stayed until 2006. Up until that point, the US Consulate General was on Shamian Island, and since every American adoptive family had to obtain a visa from the US Consulate, all American families stayed on the island in a hotel called the White Swan. This is where we stayed with Gracie in 2004. After the consulate moved, the island's tourism business dropped dramatically. Fewer families stayed in the White Swan, and many of the cool little tourist shops had to close their doors. The White Swan eventually closed for renovation in 2011, and it is still closed. No red couch photos for a while. :(

However, it is such an iconic place that most agencies, even though their families don't stay on the island, still take their families to the island for a day of shopping. Today was our day. :) (It was also a pitstop in the Amazing Race this past season.) 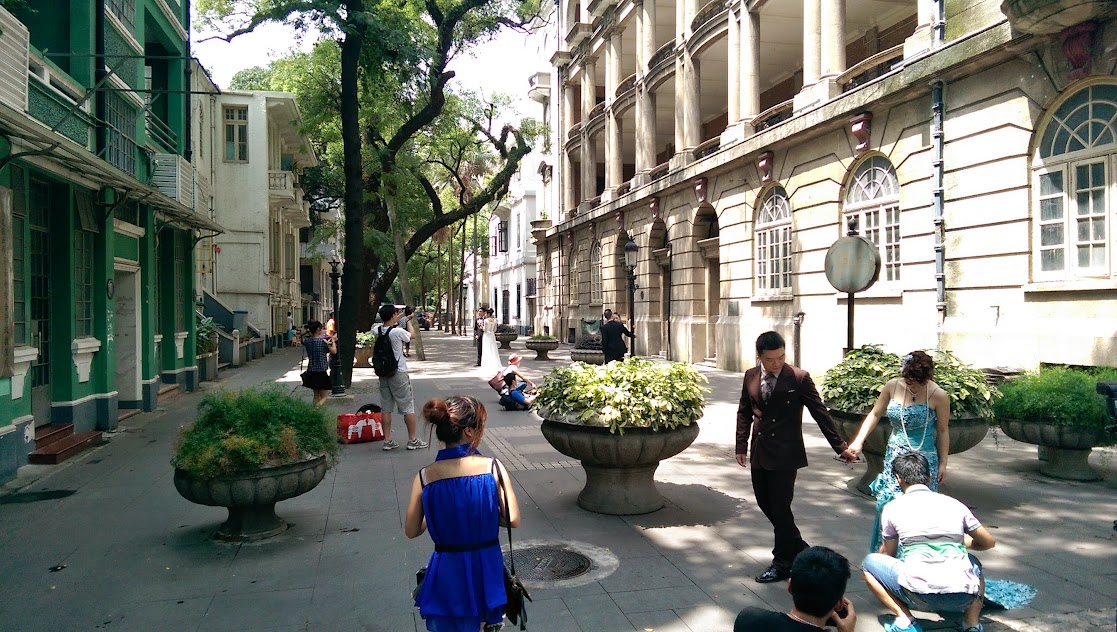 There is much British colonial influence in the architecture of this island, since the buildings here are well over 100 years old...capturing the era when Britain occupied Hong Kong. It is also a famous place for newly engaged couples to have their "love story" photographed. 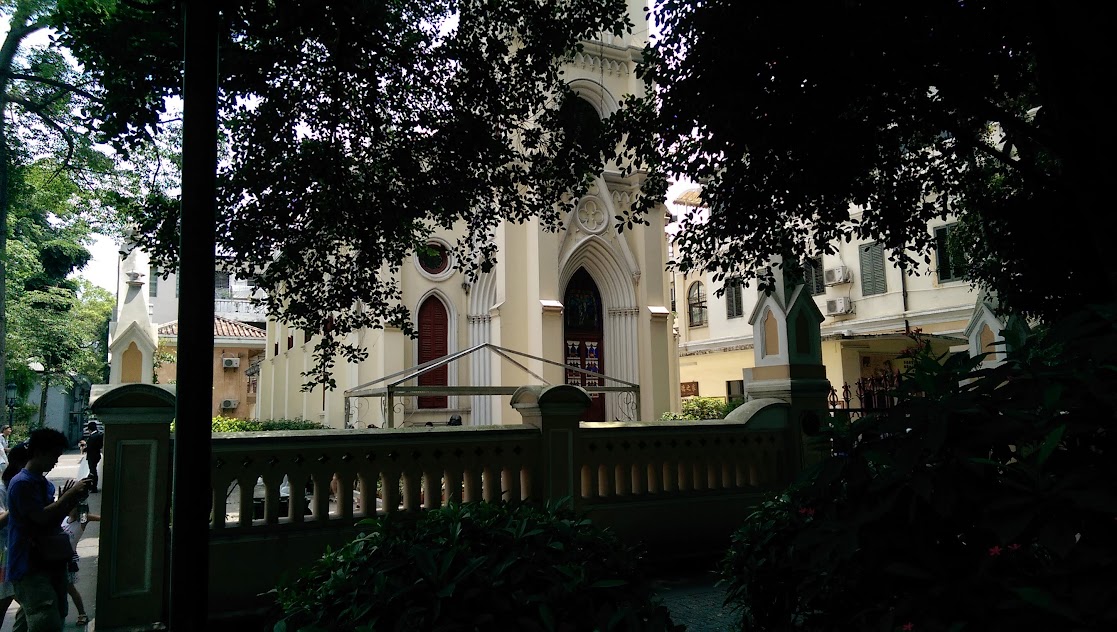 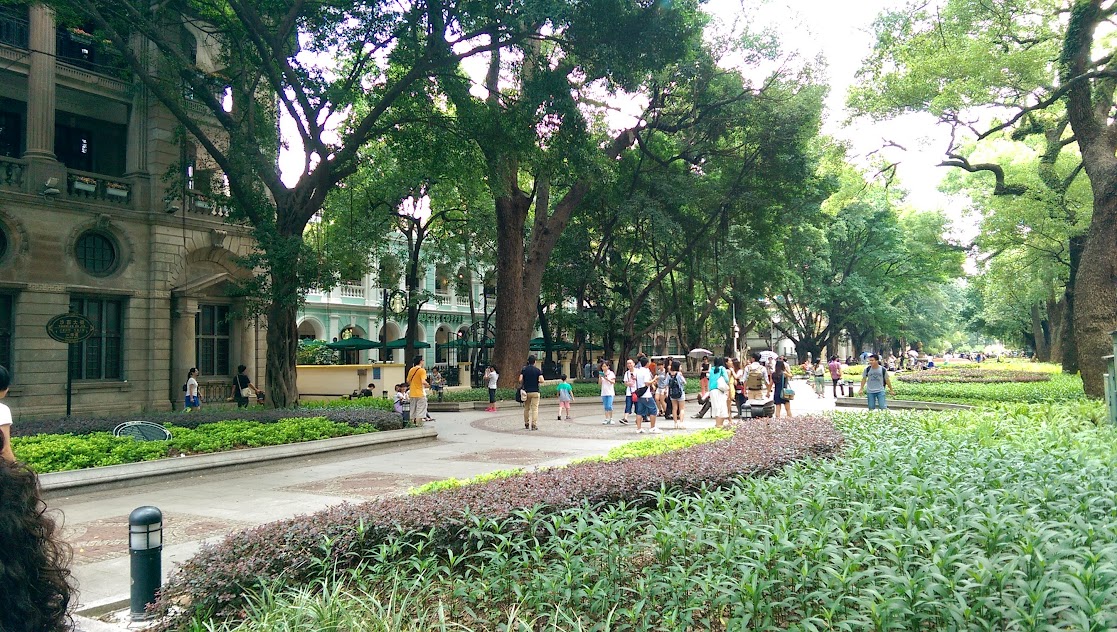 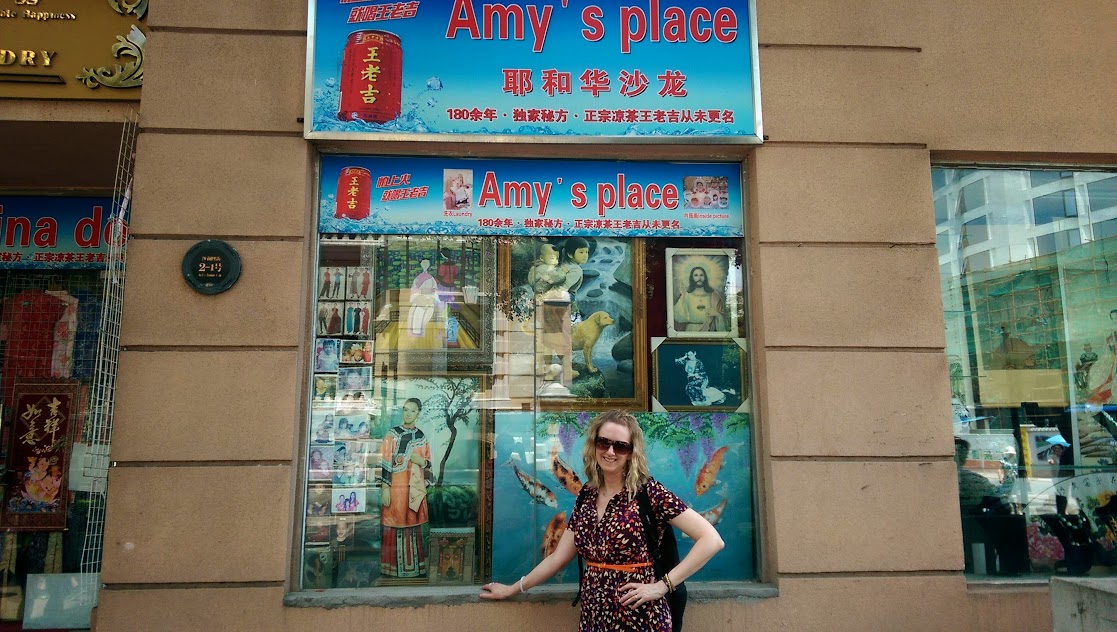 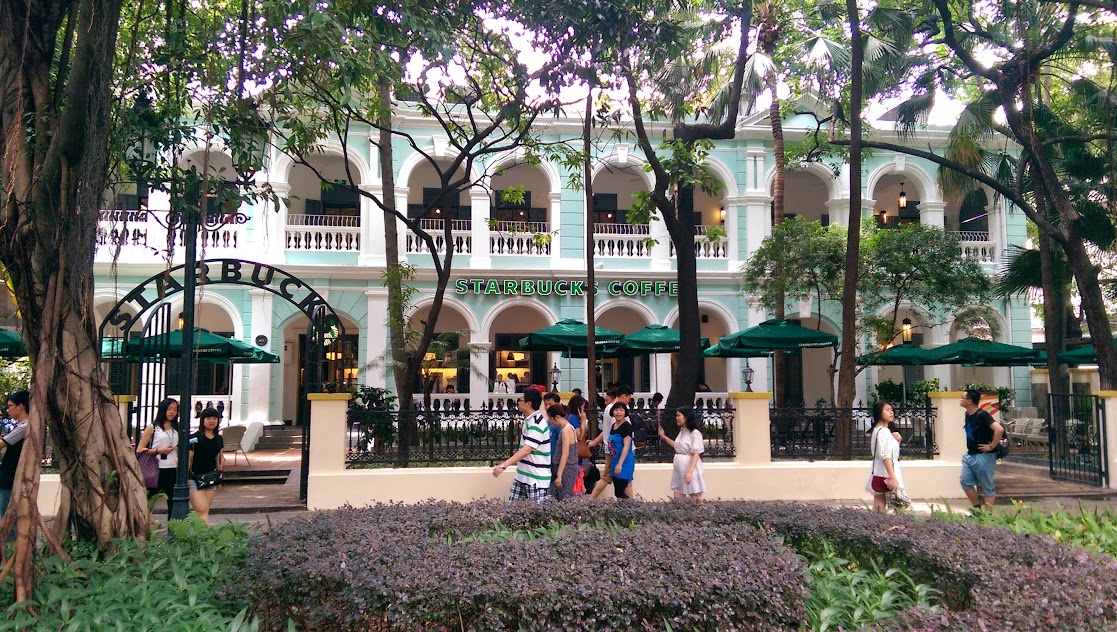 We came back to the hotel after our shopping extravaganza--which included such things as silk, chopsticks, necklaces, and a new suitcase to carry it all home in--to some much needed quiet time. Then it was time to hit the pool once again. 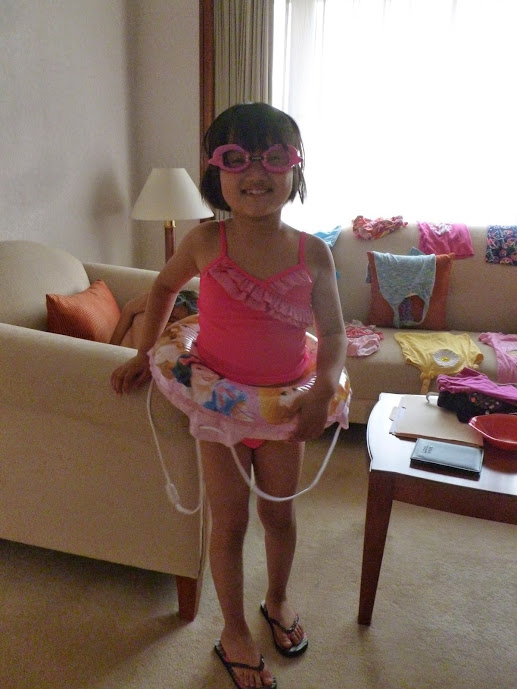 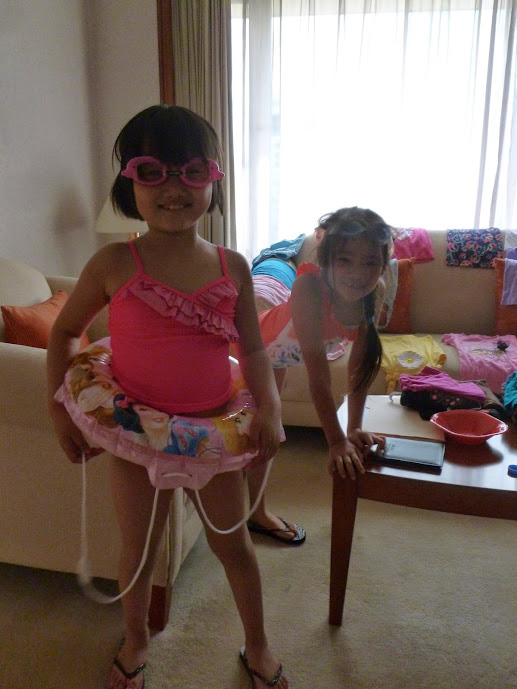 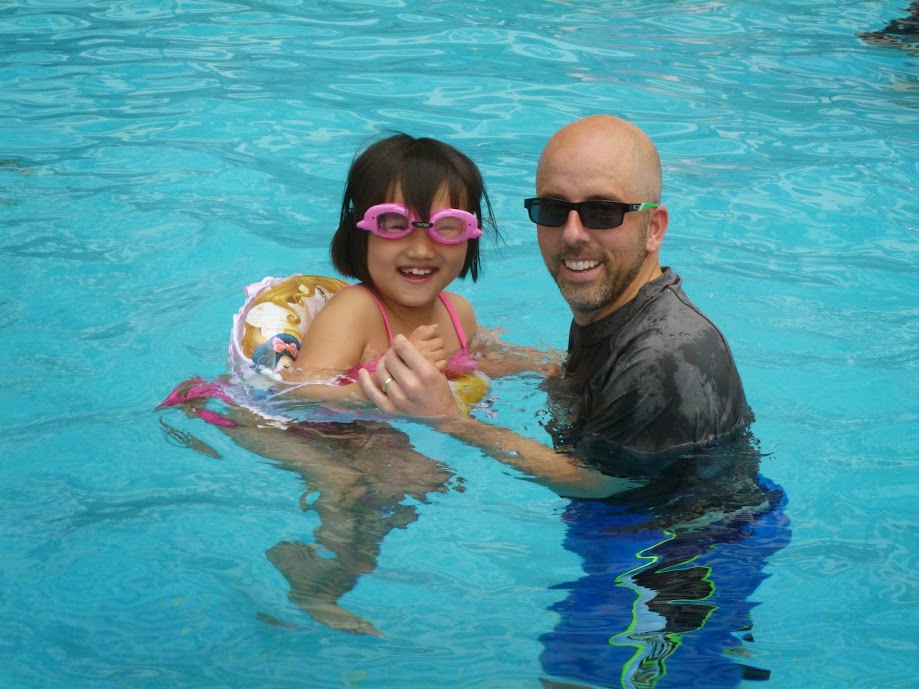 We decided to eat in tonight, so Simon went across the street for some Mexican/Arab fusion food. The Gs had burritos; Simon and I had chicken shwarma. YUM. 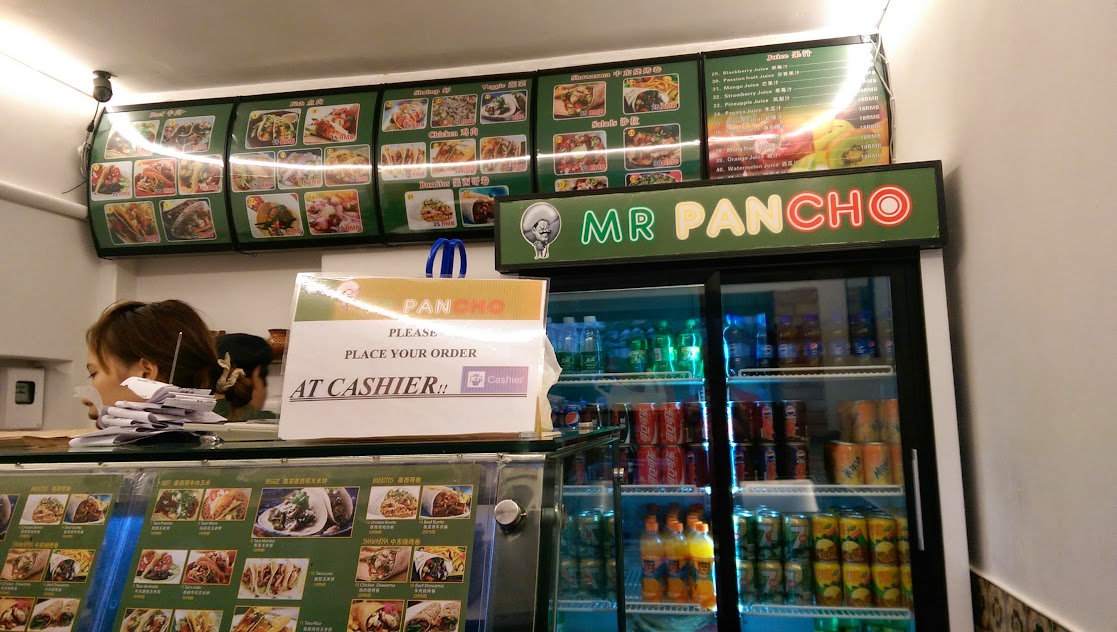 After dinner, it was time for birthday cake! I forgot to say that right before we went to the pool, the hotel staff delivered a birthday cake for Gia to our room. It was so cute! 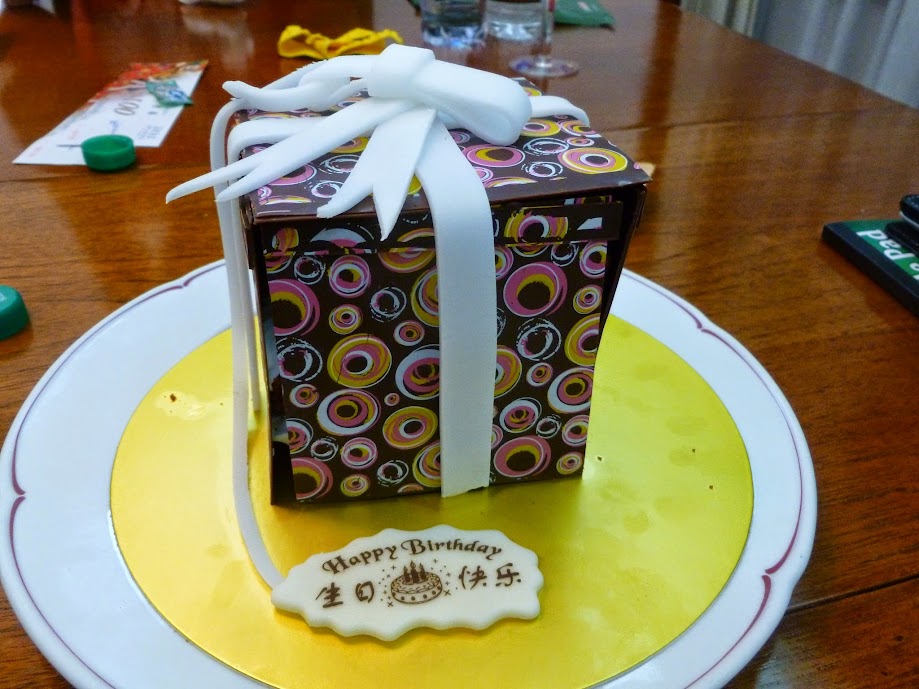 The entire thing was edible! Chocolate on the outside, and red velvet stuffed with cream and fruit on the inside. Mmm, mmmm, good!

Of course, we didn't have candles, but we sure did sing a rousing rendition of "Happy Birthday" for Gia Pearl Chunyu. Not sure she knew exactly what was going on, but we did it anyway. :) 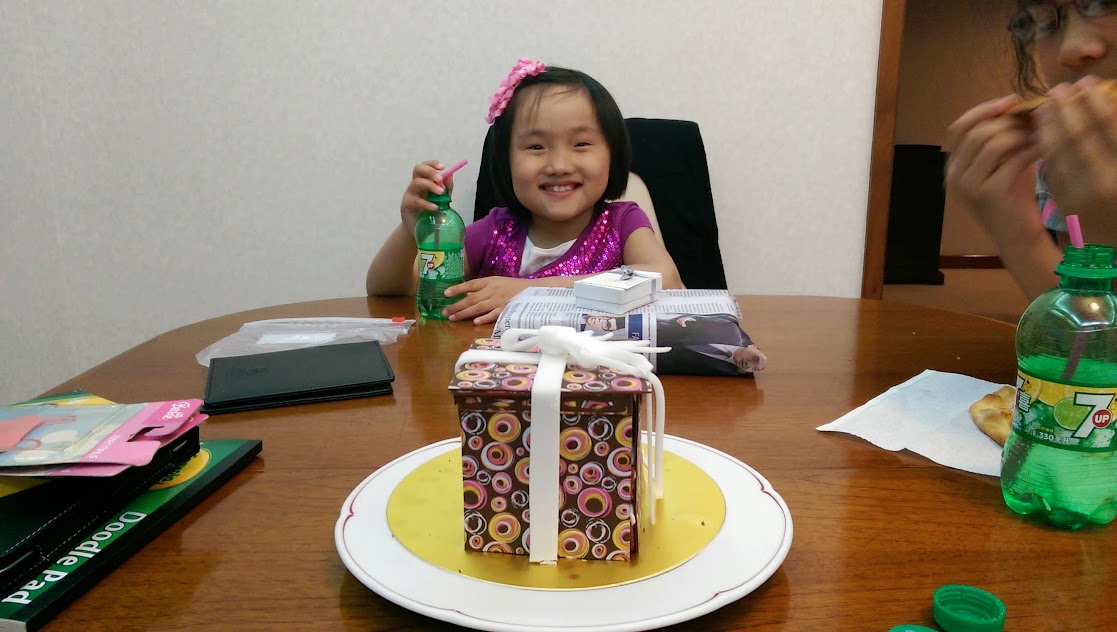 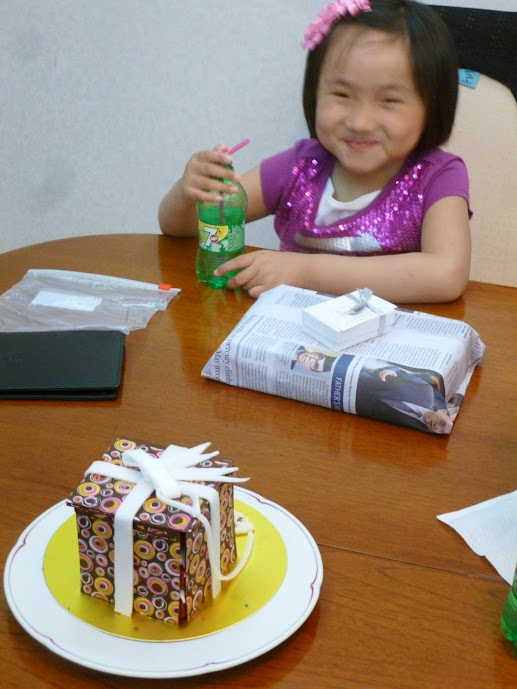 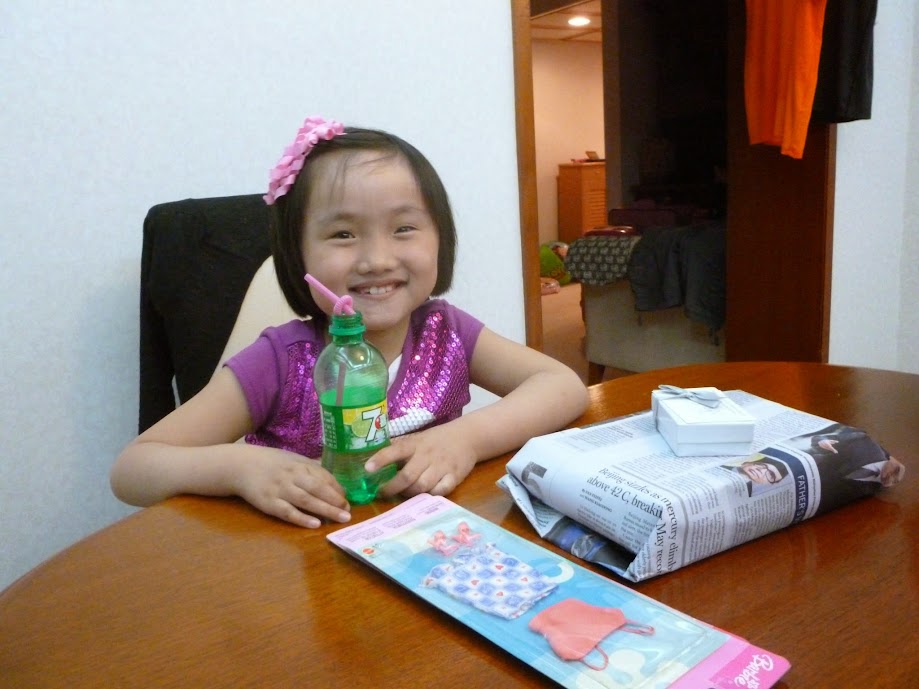 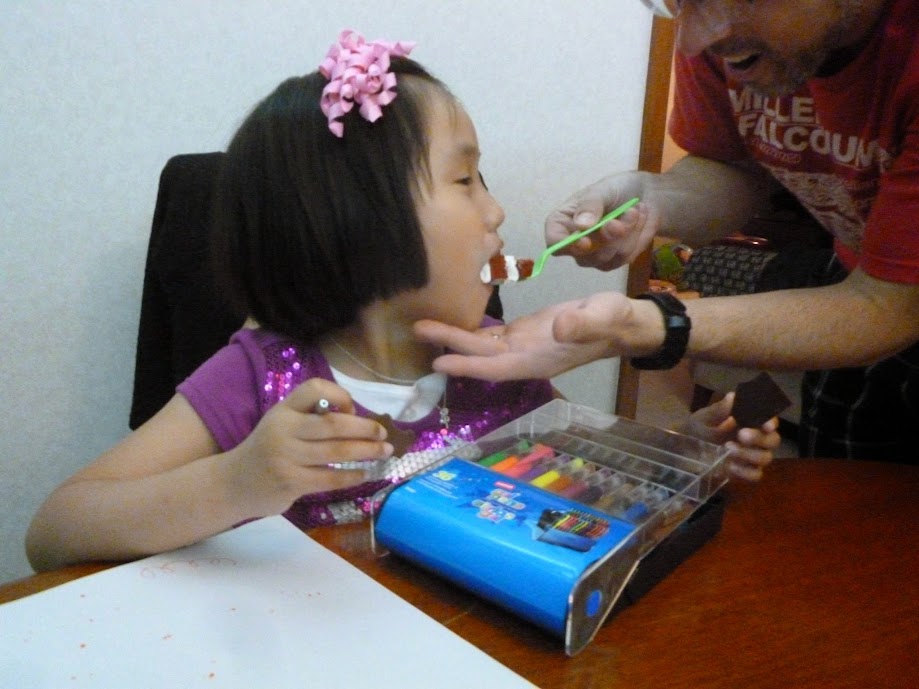 She opened 2 gifts. One was a necklace form Mama and Baba. It has a cross, a pearl (her birthstone and middle name), and a "G" on it. 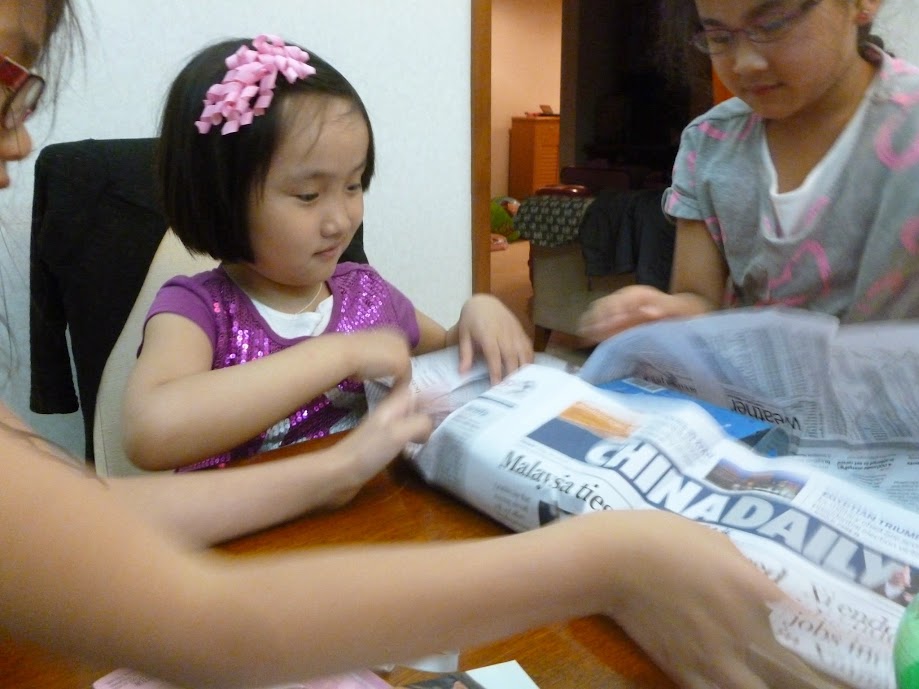 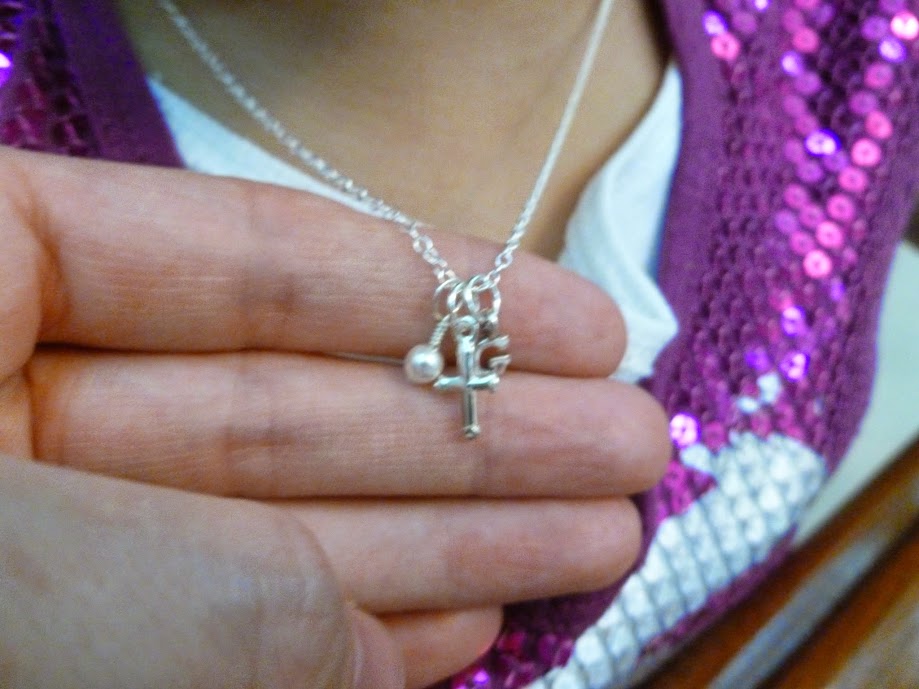 The other was a set of gel pens, just like her Jie Jie and Mei Mei have, because she loves to draw. 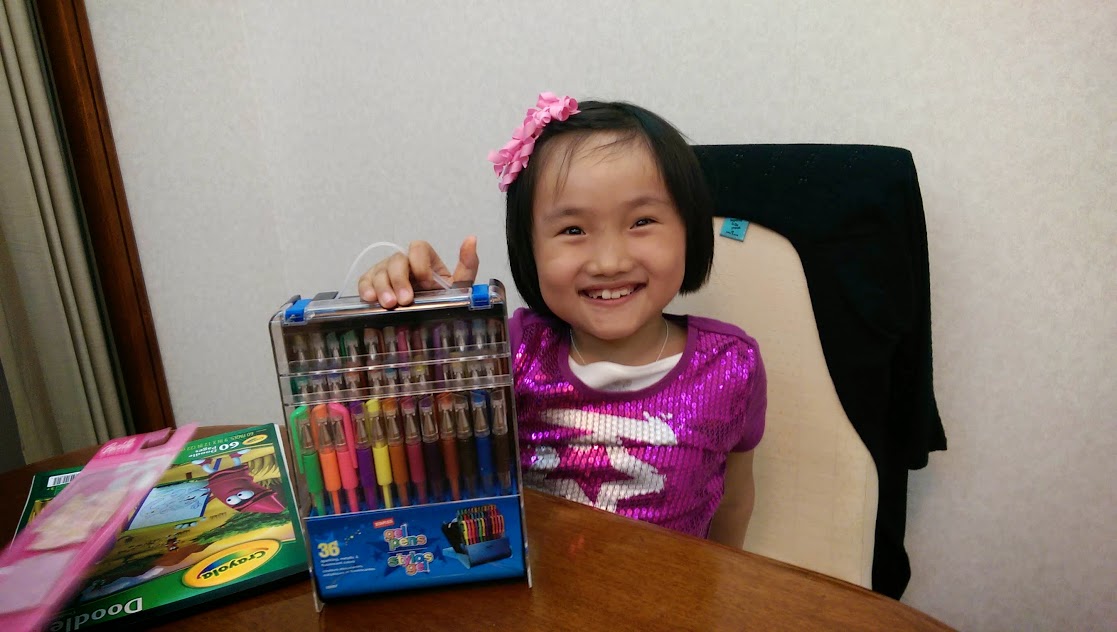 Speaking of drawing, here are some of her masterpieces... 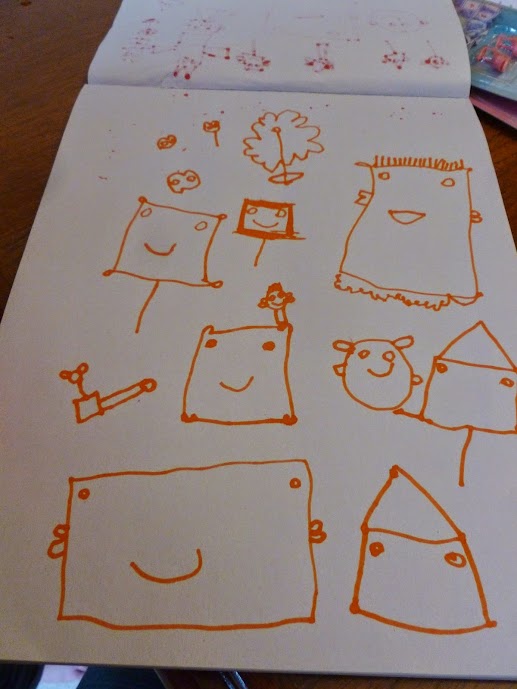 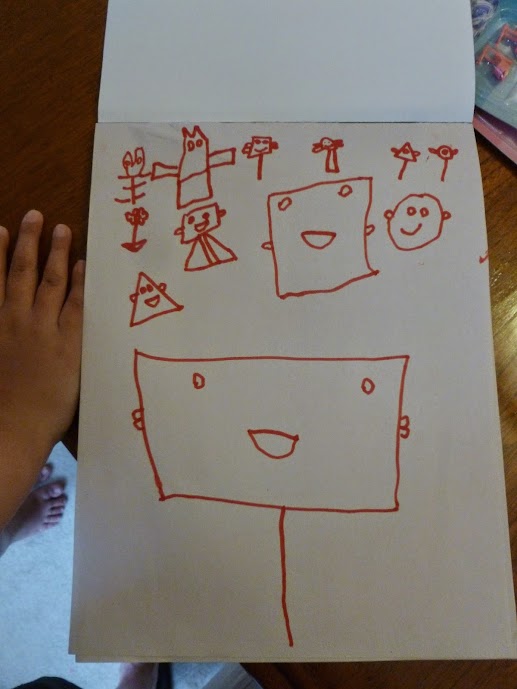 Happy birthday, Gia Pearl Chunyu! We are SO GLAD that you are in our family now, and that you will forevermore have someone to celebrate your birthday with you!!! WE LOVE YOU!!!!!

Alyson and Ford said…
Love reading about your China trip, so many memories and the girls are just perfect! One note: we stayed at the White Swan Hotel in late 2008 during our trip, so it was still open then; not sure when it did close. You all are having too much fun!