By Amy - August 16, 2011
Today was adoption finalization day. When we adopted Gracie, we had Gotcha Day and the adoption finalization on the same day at the same time. Now, China often gives families a 24 hour "honeymoon" of sorts. This was the exact spot when Gemma's first adoption was disrupted last November. We were afraid that she would have flashbacks to that time. Also, we had to go back to the same office where we received Gemma yesterday and where she had, ahem...a meltdown. We were really terrified that she would definitely remember the fear she expressed there yesterday. We were praying HARD all morning and all the way to the office.

Well, once again, God proved himself faithful (like I really need him to prove himself again and again, right?)! But he continues to show himself faithful and merciful--Gemma was absolutely FINE at the civil affairs office today. No flashbacks, no meltdowns, no sadness. It was as if God wiped her memory clean of that fear, just like we tried to wipe her tears yesterday. So, we sat in front of a notary public as well as a registrar and explained why we wanted to adopt Zhong San Hui and promised that we would never abandon or abuse her. Easy promises to make!! And that was that! She is officially a Miller today--August 16, 2011.

Gemma slept REALLY well last night...like 10 hours well! Oh thank you, Jesus! She did not cry going to bed, and only had a few tears when she woke up. We took her to the breakfast room and she ate, and ate, and ate...we had to pull her plate away from her to get her to stop. It's kind of comforting and heart-breaking at the same time to watch her eat. It's like she knows how to eat for survival, and she'll eat everything that's in front of her until it's taken away. I'm glad she's getting full, though. I hope it comforts her to some degree.

After breakfast we took her and Gracie to feed the koi. She was a little standoffish at first, but after Gracie showed her how to do it, she joined right in. Cute!

After the adoption finalization, we ate McDonald's chicken nuggets and fries in our room. Gemma joined right in on the American grub. Then we went shopping for some odds and ends--ramen noodles, goggles for G to use in the pool, snacks, and water/soda. Oh yeah, and we bought each of the girls a Barbie doll. We found out today that Gemma likes Barbie. Wish we would have known that sooner! G only has about 100 lying around the house we could've brought with us. :) We rented a stroller from the concierge, and Gemma LOVED it! She's almost too big for it, but there's no way she could walk with us for as far as we walked today. She's tall, but skinny, and she doesn't seem to have a lot of strength.

We came back to our room and vegged for a while. The girls played with their Barbies, and the parents pseudo napped. Then we went to a yummy--authentic--Mexican restaurant for dinner. It was really good! Gemma discovered strawberry smoothies. YUM-O!

Now, the girls are in the tub again, and Gemma is like a new person in there! She laughs, giggles, talks, and repeats some words that G says. Tonight she said "hello," "gentle," and "bottle."

We're going to try the pool sometime tomorrow. There's a little kiddy pool, so hopefully Gemma will be willing to go in it if G does.

Thank you for your continued prayers. We know there will be ups and downs, but today was definitely an UP!!! 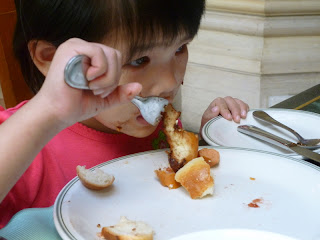 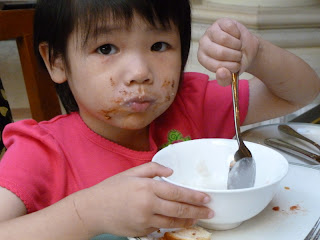 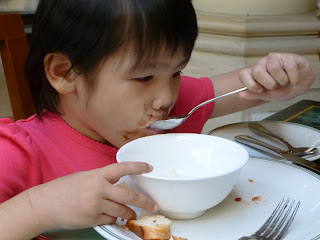 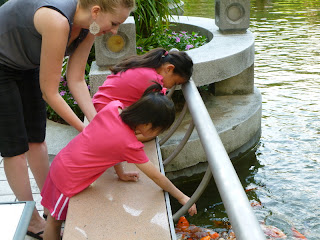 Driving to the Civil Affairs Office to make it official... 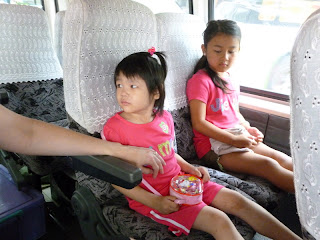 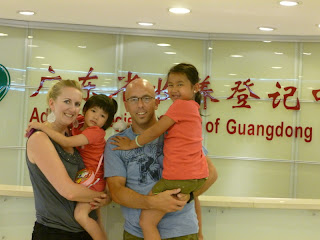 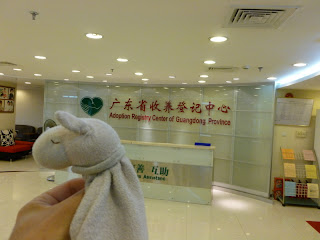 We have tractor-trailers to haul this kind of stuff in America. 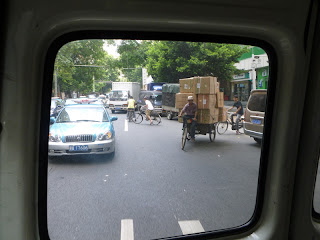 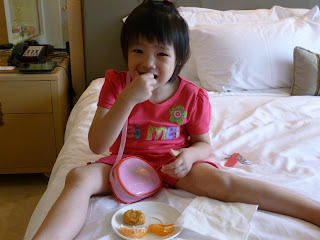 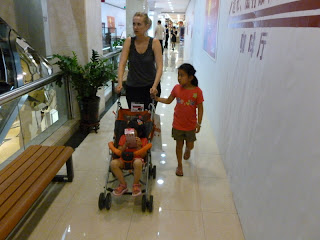 Playing with the new Barbies... 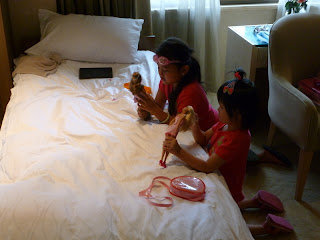 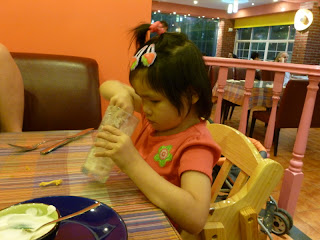 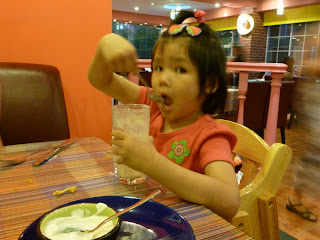 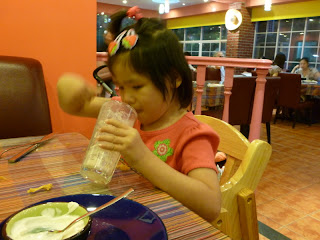 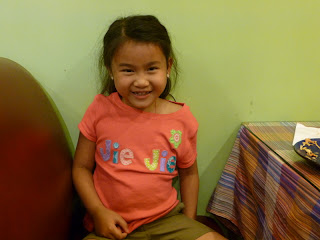 Dawni said…
I was going to say the same thing. I cry everytime I read one of these posts! Simon and family...i am SO happy for you guys...words can't even express....and what a blessing "little G" has gotten to have you all for her family!
August 16, 2011 at 6:03 AM

Martha said…
Gracie is just beaming (all of you are!!) and is perfectly in her element as a Jie Jie. :) Praising God with you for a good night's sleep for sweet Gemma and continuing to pray for more bonding, giggles, and smiles. Don't forget to buy about 100 qipaos for the girls!! :)
August 16, 2011 at 6:46 AM

learningtogether said…
Amy,
Just catching up on your first days with Gemma. Tears and smiles, but sounds like you have a good family team already!

Roseann D said…
Yippee! What a momentous day! We are so HAPPY for you all! Can't wait to hear about Simon and G2 on the golf course! How long till your consulate appt?
August 16, 2011 at 11:02 AM

Vicky said…
Love their shirts! Did you get them there? Gemma has the prettiest eyes! I love the fact that Gracie is such a sweetheart to her little sister. The family photo is precious and perfect!
August 16, 2011 at 2:06 PM

Gretchen said…
What a perfect day! She looks like she is doing much better.

You will have to tell me where the Mexican restaurant is. Last time we went to China I craved Mexican food. Please tell me they have chips and salsa!!!
August 16, 2011 at 4:09 PM

Tammy said…
We are so happy for you..Amy . May GOD continue to knit you all together! peace, wisdom and JOY unspeakable my friend!
Soak it all in....
Blessings
tammy
August 17, 2011 at 7:42 AM