Showing posts from April, 2008
Show all

On Sunday April 6th, we attended the Knights of Columbus Mostaccioli Dinner at St. Rita's Church. This longstanding tradition is a popular outing for many families and friends across a wide range of generations. It is always fun to see all the people and the families each year. In a way it is kind of like a big reunion. Well, in addition to delicious food and a fun atmosphere, while we were leaving and going to the car we noticed it was raining and sun shining at the same time! That meant one thing... there was a RAINBOW somewhere! Gracie has been talking about rainbows for a long time and had seen them in books, videos, and pictures, but she hadn't actually seen one in person.... until Sunday. As we got outside we looked around and finally, there it was... a rainbow! Gracie was so excited she could hardly contain herself. As we took a little stroll around Kellogg just to see the sights, we could see the rainbow even better. As it rained off and on later that day, Gracie and Gr
Post a Comment
Read more

While we were over in the Seattle/Tacoma area for Spring Break, we got to attend Gracie's cousin Luke Rowe's (AKA Lukie-Bob) 1st birthday. We had a wonderful time in Mark and Sarah's wonderful home on Bainbridge Island and also got to do some fun things like go to the Zoo and the Pacific Science Center. We also got to ride the Ferry both as a walk on and with our car. Gracie had a blast with cousins Ava and Lukie-Bob and a great time was had by all. We can't wait to return for another visit!
Post a Comment
Read more 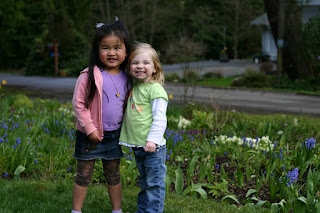 Well, we officially got tired of the never ending snow in the Silver Valley, so we loaded up and headed West to Seattle/Tacoma for Spring Break. It turns out we barely made it as the most treacherous part of the trip was between Kellogg and Spokane. Snow, ice, slush... you name it we saw it. I guess we narrowly avoided lots of accidents and even closure of the 4th of July Pass. Nonetheless we made it to Tacoma safely and are enjoying a fun spring break with friends and family. Sunday, Monday, and Tuesday, we enjoyed spending time with the Rowe's at their "new" residence on Bainbridge Island. We had a wonderful time spending time together and celebrating Lukie Bob's 1st birthday. We also went to the Zoo and the Pacific Science Center in Seattle which included fun ferry rides!
Post a Comment
Read more
More posts