When I signed off last night I wrote that I was praying for God to give me strength. I have lots of friends who don't share my Faith in Christ, and with the way the world (including me sometimes) is today, I can't say I blame them one bit. Christianity's human blemishes are often magnified and exploited beyond reason. But the Truth remains, and I believe! For any of you who have doubts, (like me) this post is for you!

I woke up bright and early today. Actually, it wasn't all that bright at 5AM. As Gracie often says, the days are getting shorter and the nights are getting longer. So I strapped on the headlamp and headed out for a late summer AM run. Despite a loose sensor on my shoe, I trudged along just grunting out a good workout and releasing some tension/stress.

When I returned it was time to prep for the famous "Micky Mouse Pancakes." Gracie thought it was the cat's meow for me to make them on a week day. I got the griddle hooked up and began mixing the batter. Gracie was still sleeping. I tip toed down the hallway to get a glimpse of her in her most peaceful state. She was indeed sleeping and it comforted me as she has been known to get up in times of stress or tension. Seeing her sleep was very calming for me, a moment I cherished, despite its simplicity.

Then things got rolling. Gracie woke up and immediately began explaining to me things that were going through her head. I knew she was exicted, but not stressed. "Thank you Lord," I thought and prayed silently. Amy then began conversing with Gracie and kept her occupied while I prepared the "First Day" feast. As she dined on the Disney inspired flapjacks, Gracie waxed on about all the things she could think of. Good stuff as always, Gracie never disappoints when it comes to riveting conversation. All the while I was nibbling on the "mis-flips," the pancakes that didn't make the cut, while frantically trying to arrange all the gadgets I intended to use throughout this grand occasion. I conversed with Gracie as I sat with her at the table. Yes I fought back some preliminary tears, but knew that they were nothing compared to what would surely come shortly.

Before I knew it, the time was 7:35 and it was go time. Instead of being in the prepared state, I was now scrambling a bit to get it together. Emotions in check, I was gathering up my tech tools in preparation for the photo shoot before we left for Sunnyside Elementary. TMZ eat your heart out.

On a whim I decided to divert my attention/stress and dump the garbage, for it was Monday and that means garbage pickup day for Gulch de Montgomery. So I cinched up the trash bag under the kitchen sink and sauntered out the sliding glass door, down the walkway, out the gate, to the trash can. As I begrudgingly tugged the can towards the road, signaling to the garbage crew that I wanted my garbage dumped, I looked to the west as I often do to admire the view. There before my eyes was the most amazing rainbow I have ever seen! I slapped the lid of the trash can down and ran to the house like Usain Bolt shouting for Gracie to go outside.

For those of you who don't know, Gracie is completely infatuated with rainbows. She has talked about them non-stop since she was old enough to communicate her thoughts. The statements and questions about rainbows range from science type inquiries to whether or not Unicorns live in them. This girl loves her rainbows. I can't state this emphatically enough. Not a day goes by that she doesn't say "Daddy, do you think Unicorns live in rainbows?"

What I was witnessing was God giving my precious daughter something she cherished the most on her big day. It was simply breathtaking. One of my friends pointed out later that this miracle of nature was in fact a "double" rainbow, and in fact it was. ROYGBIV was in fact present twice! The orientation of the rainbow even made it seem as though it was directly over Sunnyside Elementary! As we marveled at this wonderful sight, it hit me like a ton of bricks. God had given my little girl something she cherished deeply on a day she needed it most. OK I needed it too. Yes, even believers, Christians if you must, need reassurance at times. Anyway, back to Gracie's reaction. She was so thrilled nothing else mattered. She beamed with excitement and confidence.

It wasn't until I began to converse wth Gracie in the car, on the way to Sunnyside that I began to well up with emotion. I first quietly thanked God for His Faithfulness and then struggled mightily to eek out the words, "Gracie, I know that Jesus gave you that rainbow to tell you 'I am always with you.'" Those of you that know me can imagine my voice cracking like a 7th grader asking a girl to dance. But with G in the back seat, I was able to mask my emotions.

The rest of the "First Day" was simply amazing. No blubbering, no panic, and no fear. Gracie was riding on the clouds an nothing could stop her. Seeing my little girl's confidence gave me a resolve like I have never felt. I kept thinking about Martha's email saying "focus on Gracie's excitement," and how it was so profoundly perfect! Gracie was beyond excited and was leading the charge. In the new classroom she jumped right in and showed no hesitation. All I wanted to do was take pictures and enjoy! Gracie's teacher even had a personalized box of kleenex just for me!

As all of this transpired, all I could think was how thankful and amazed I was by God's faithfulness. He strengthened me and comforted Gracie beyond description. It was a very powerful experience.

I apologize for the length of this blog post, but I really felt a burden to share with you how God touched me today. I don't think people realize how much Christian's struggle with their faith sometimes. Have I ever not believed in my salvation, absolutely not, but that doesn't mean I don't wrestle with my thoughts and God's master plan daily, especially in this day and age. Today was a big day, but in ways I never could have imagined. God was, and is so very faithful and good. I wanted to share this with you. Did I cry today? Absolutely, but in ways I couldn't imagine. I'm still in awe.

I guess I had a "Full Day," like Jimmy V said, and for that I'm thankful, and my faith is strengthened.

Carol Woolum Roberts said…
I, too, saw the rainbow as I was taking Coco to KMS yesterday morning. My thought was, well, Lord, what are you promising us this year? And I know His promised are always good. What a special blessing on the first day of school for all of us!!
September 1, 2009 at 6:11 PM

Gladdie Mae went 27 days in a row wearing her Gotcha outfit. We started kidding with each other...making bets for how long she’d hold out.
Then came Sunday. She didn’t change out of her pjs all day. Then Monday, the same. Then Tuesday, the same.
We Thought, HOPed, PRAYED that she was turning a corner in her trust and acceptance of us. Could it finally be?
Then, that tiny sliver of sunlight was shut out when the window slammed down this morning.
She got dressed in her Gotcha outfit. Once again.
I’m not going to lie. I was upset. I melted down.
Partly from pride/jealousy. (Am I not enough for her? Why can’t she love me like she loves her foster mama?)
Partly from inconvenience. (Geez, now I’m going to have to wash this outfit every night again!)
But mostly from a broken heart...for my daughter.
Here she is, having just had the rug pulled out from under her. Her entire world topsy-turvy.
She’s trying to make sense of it all by clinging for dear life to the only tangible thing she has from her ol…
Read more

Whew! What a day! In the words of the wisest 7-year-old I know, today was "tough--tough but good." Having gone through a Gotcha Day before, you'd think we would know what to expect, right? Well, right and wrong. We knew she was timid, introverted, and shy; we knew she had a previous disrupted adoption; we knew she was scared of foreigners. What we didn't know was how that would all manifest itself. Well, it was something. There were lots of tears...from Gemma and from us. There were a LOT of prayers. And the biggest thing I can say is THANK GOD FOR SIMON! He was my rock, and he was Gemma's rock too, even though she didn't know it at the time.
We arrived at the Civil Affairs Office with 1 other Lifeline family. We saw Gemma before she was handed over to us, and she looked happy. After she was given to us, it was mayhem for a while. To preserve Gemma's dignity, I won't go into details. Let's just say our hearts were breaking for her. The fear in her …
Read more 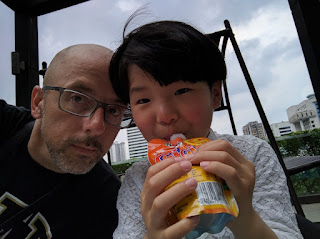 We met Gladys Mae 7 weeks and 4 days ago. That's 53 days total. For over 40 of those days, Gladdie refused to wear anything but her Gotcha Day outfit.


We knew (mostly) the "why" of this phenomenon. For the days in China, we decided to just let it ride. Her entire world was changing, and this ONE thing was all that she could control. Plus, she was grieving HARD for her "mama," and I think these clothes gave her comfort in her grief.

Once we arrived home, we hoped that she would embrace her new life with as much vigor as she grieved her old.

She kind of did.

But not with her clothes.

My parents came to visit in early June...we'd been home for a few weeks by that point.

My mom said that Gladdie's Gotcha outfit was starting to look a little worn out. I totally agreed. And it brought to my mind again an idea that had been swirling around in there since China.

Her clinging to her worn out …
Read more