Because He first loved us

He has a way of reminding me of what His Word says. He often does that through songs.

This year, two songs that have been playing in my heart and mind a lot are "Do Life Big" by Jamie Grace and "Thrive" by Casting Crowns. Here is a sampling of their lyrics, emphasis mine:

"I came to give you life,
So spread your wings and fly,
Now go and show no fear,

"Just to know You and to make You known
We lift Your name on high
Shine like the sun, make darkness run and hide
We know we were made for so much more than ordinary lives
It’s time for us to more than just survive
We were made to thrive"

God doesn't want us just to survive. He wants us to LIVE. Live in Him. Live for Him.

I knew that God wrecked my heart for the orphan after we adopted our Little G 10+ years ago. But He solidified that knowledge when I lived through this day. There was no going back. God had called me--us--to care for the orphan. So far, that had been manifested by us adopting 3 children. I didn't know what the future would hold.

I admit, I thought God might be calling us to adopt Gia's best friend in China. I wanted it to be so. I mean, what better fairy tale ending to the story of 2 orphans in China who grew up as "sisters" to each other than to actually become sisters in the same family through adoption?? Seriously. Writers and movie producers couldn't write scripts better than this.

Weeks and then months passed with no "feeling," "nudge," or even a "whisper" from God that we should pursue Gia's BFF. So I promised myself that I would do all I could now to be able to tell Gia later in life that I did everything in my power to see that her best friend found a family. I started advocating for her.

I joined 2 (or more) advocacy groups on Facebook where I pleaded for Gia's BFF's life. Please, won't somebody step forward for this precious girl?!? She was well on her way to the magic (or not so magic) age of 14. When, in China, orphans become ineligible for adoption. (BTW--She has less than 10 months left before she ages out.)

I pleaded. I prayed. I advocated.

I also saw. Other posts. Of orphans needing families.

She was on an agency's "list" under a specific name. Something about her smile and her ridiculous hair cut caught my attention. She was super cute. She had the same special need as Gia. She was younger than Gem, so would fit perfectly in our family age dynamics. Hmmm....

Then I asked the agency for her file and all of a sudden that agency didn't have her any more. Oh, man. I guess she wasn't meant to be ours. I was bummed and tried to "find" her on other agency lists to no avail.

Then one day, she appeared back in the advocacy group...this time with a different agency. That meant that she had not yet been chosen by a family.

So, out of curiosity, and without talking to Simon first (oops! did I do that?), I asked for her file. The agency gave me all the information they had on this little girl, including pictures and videos. I watched and read, read and watched. I didn't know what to do.

I knew that Simon's heart was--ahem--no where near not exactly where mine was in regards to adopting again. Well. I did the only thing I knew to do. I fasted and prayed about it. For a few days. Asking God to give me a "sign" about whether or not to share my heart for this girl with Simon.

I found out her Chinese name.

It is the EXACT same as Gia's Chinese name except in reverse order. No kidding.

Okay, God. I heard you. That was the kicker for me. I shared with Simon that night.

I was SO NERVOUS to tell him about this girl! And it took him a good 3-4 weeks to ponder, pray, wonder, crunch numbers, and figure stuff out before told me that he was on board. :) Oh, and BTW, even though he "crunched numbers," we still don't have it all figured out.

(P.S. To be honest, that was THE LONGEST 3-4 weeks of my entire life! But, I pledged to the Lord to be quiet before Him and wait for Him to nudge my husband's heart. Boy am I glad that I did that! I would not have wanted Simon to agree to adopt again because he felt guilty or because I had somehow "forced" it on him.)

Okay. So he agreed. What next?

Next, we asked the agency to "lock" her file for us while we got it looked over by a medical professional. The agency said no problem, you have 2 weeks until we "unlock" her file and make it available to other families again.

Okay. So, I head right to my Facebook adoptive mom groups and ask for recommendations for a doctor to review this child's file. I got one immediately. I sent the file to the doctor, and a day later I received a response.

I sent the doctor's info to Simon. And he didn't say anything for the next 2 weeks. Eeek! I decided to be quiet before the Lord again and wait. Until the agency sent me this email...

"We’ve had ----- on hold for your family for 2 weeks now, and we are hoping that the additional information we received from the orphanage was helpful.  Have you decided if you want to begin the adoption process to make ---- a part of your family?"

We prayed. We talked. We cried. We listed "pros" and "cons." It sounds so harsh and heartless, but unless you've been in our shoes, you probably don't really understand all that goes into a decision to adopt a child...from another country...with special needs.

So, here we are paper chasing again. And in case you're wondering, yes, we have to go through ALL.THE.PAPERWORK again, even though we've done it THREE.TIMES.BEFORE.

But, if all goes well and China approves us, we will get to look at this face every day for the rest of our lives! 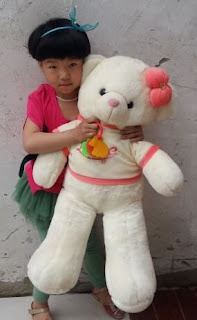 P.S. We realize that there might be some of you scratching your heads and saying to yourselves, I just don't get why they don't adopt Gia's best friend. Well, again, unless you've been in our shoes, you really don't understand all that goes into making a decision of this kind. It's more than a decision to us. It's a calling. And we do not feel called to adopt Gia's friend.

That said, she is still available to be pursued by a family. Could she be YOUR daughter? Let me know, if so, and I can point you in the direction to start your adoption process. :)

quilt'n-mama said…
Friends, we are so excited for you!
Can't wait to follow and see what God has in store for all of you, especially this precious one joining you and gaining the blessing of a family!
June 27, 2015 at 7:14 AM