No Man Is Poor Who Has Friends 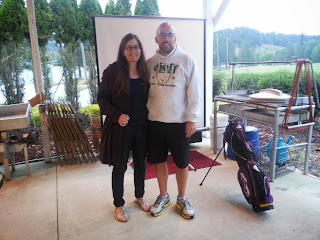 It wasn't the first time, but a few weeks ago, I compared my experience at my final KHS Golf Awards to that of George Bailey from the ever so famous "It's a Wonderful Life." Former golfers, friends, and family made me feel like what Harry Bailey said about his beloved brother, "A toast to my big brother George: The richest man in town!" It was a wonderful ceremony, and end to my golf coaching career. Little did I know that the parallel to this perennial favorite was only beginning.

Rewind a few weeks. I am on a bus on the way to Moscow, Idaho, home of the Moscow Invitational Golf Tournament, when I got an email from my great friend Laurie Roberts. It referenced a sermon from Ralph Lowe so I immediately began listening. The message was about having Faith and God honoring His believers in ways beyond our understanding or belief. Little did I know how applicable this sermon would be to my life.

I am the Technology Coordinator of the Kellogg School District. I came into this job by being the new guy on the block at Kellogg Middle School when networked computers were making their initial push into the classroom. (Yes, I'm fully aware that computers have been in the classroom much longer than my teaching tenure, hence my "networked" description.) I started out as a teacher, and I moved into Educational Technology through the years.  I love my job, and as of the last 6-8 months, I've been able to really begin to focus on the parts of Educational Technology that matter to me the most, classroom technology.

Though a series of connections, I learned that a new position had been posted at the Boise School District, "Instructional Technology Manager. " This looked very intriguing, and also too good to be true. Upon further investigation, I learned that it was indeed as advertised, so I promptly applied. Like George Bailey, despite growing up in my home town, inside I have longed to "shake the dust of this crummy little town off my feet and I'm gonna see the world!" Well, Boise anyway. Just like George Bailey, I have been in my home town most of my life and I am acquainted with a majority of the residents of the Silver Valley! This is not a complaint, and like George, I love most parts of tiny Kellogg, Idaho, but I also long to get out and see more things and get access to other experiences. I've traveled to Boise for several conferences and always comment about how much I like the "big-little town" feel of Boise.

Weeks later, I landed an interview. Days later I was offered the job. Just like that. At that point the elation also turned into one of the most suffocating, pressure packed decision making sequences I have experienced. This was it. This was my dream job, and it was in the city I had so enjoyed many times prior. It was a bump in pay, and also in a school district that had as bright of a future as any in America. Better yet, it fit perfectly with the sermon I had heard months before, and included many dear friends of mine that lived in the area. Perfect story, right?

Well, I invite you to go back to Bedford Falls for one last trip. No, I'm not referring to losing any money, or jumping off any bridges, but rather other circumstance for George  and Mary that keep them close to home.  Amy and I left no stone unturned as we carefully weighed every scenario and option in making the move. It was both exciting and stressful, bittersweet, if you will. We both swung from one end of the spectrum to the other, each of us criss-crossing between a leap of faith, and pragmatic reasoning. Ultimately a couple key factors brought us to the same realization... that we should stay in Bedford F... er, uh Kellogg. It was heart wrenching, yet we knew it was the right decision.

Would God have blessed us and honored our decision if we had chosen to take the leap and moved to Bosie? We believe so. But because of our reasons, we just felt it in our hearts to stay in Kellogg. Our decision, was a relief of sorts, but it was not easy. However, the process brought us closer together on many things, including a renewed attitude of resolve and thankfulness for the exact place and scenario God has us in right now. I work in a wonderful community and school district. I have an outstanding bunch of co-workers and I think we do a pretty good job of cultivating technology in our classrooms and schools. As one of my co-workers said last week when discussing the decision I was facing, "as much as we want them to, nothing stays the same forever." Such wise words!

Will the dream job be available again, some day in the future? Our faith, and our beliefs tell us yes. I choose to believe that God was saying, as my good friend Laurie illustrated, "'try this on for size, and see how it feels.' It may be that this is just a chance to get a new perspective on the life you already have (not that I think you need an attitude adjustment)." Until then, we will be thankful and say thanks for "you old wonderful Kellogg, Idaho!"

Kayla Rupp said…
Hi Vandalgrads! I DO remember you, of course, and have been wondering how you've been! Daniel has, too! He still tells people about the day he saw greater fatherly love than he had ever before witnessed.

Glad to be in touch! The girls are beautiful!