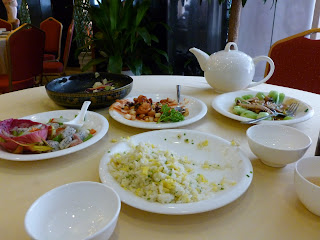 Even though our day didn't officially begin until 11:30, it felt like a full day having only 6-8 hours of sleep in the last day and a half. But, we managed, and had a pretty good day. We started with an authentic Chinese lunch. Simon and I enjoyed it; Gracie tolerated it, at best. ;) What you see in the picture is pork with dragonfruit--kung pao shrimp--bok choy and mushrooms--and fried rice. 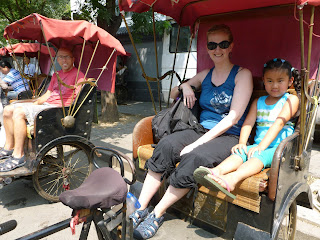 Next stop--Hutong Tour. This is us in the pedicabs. They were driven by locals through the hutongs--aka "alleys." We saw homes that were originally built for the emperor's civil affairs employees hundreds of years ago. Many of them have been torn down, but the section we toured has been preserved by the government. (Our tour guide here was Angelina--a student working part-time during the summer.) 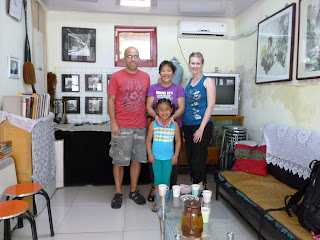 At the end of the Hutong tour, we visited with a family in one of the homes I described above. We had a nice visit and were able to ask--and answer--many questions. The room we're standing in is her "living" room. We also saw the kitchen--tiny--and learned that 6 families live in the same area as this family, and they all share ONE bathroom! (We are SO blessed!) This lady was very smitten by Gracie...she said G could stay and live with her. :) 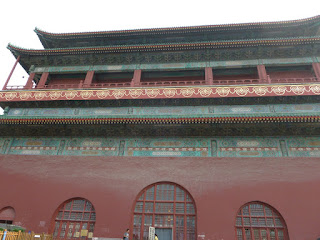 This is the drum tower. It used to be the only time keeper for villagers back in the day. We had to climb 69 VERY steep steps to get up to the drums. G was a trooper! 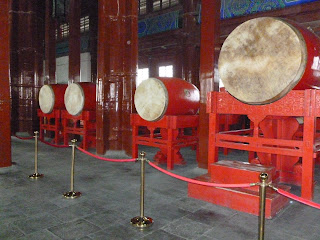 Several of the drums at the top of the tower. There is a wonderful view of Beijing from the top. 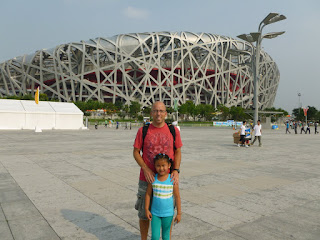 Off to the Olympic Plaza...the Bird's Nest was the NEATEST in person...it's huge! 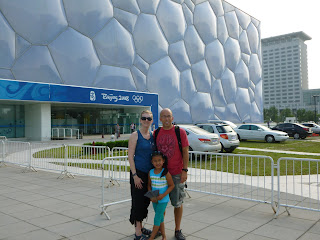 Simon and Gracie were intrigued by the Water Cube. We got to tour it. There is an indoor water park attached to it, and the diving platforms were all still intact. It was super loud in there, too. We can only imagine what it must have sounded like when Michael Phelps won his 8th medal! 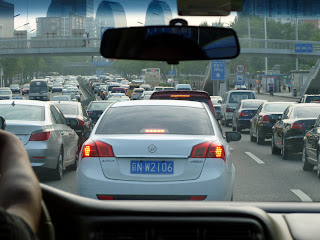 Oy, the traffic! We must have the best driver in Beijing! Curiously enough, we've not seen one fender bender, and that's saying a lot, the way people drive over here!

We finished up the day with a tour of a silk factory. Unfortunately, there is no room in the luggage to purchase a lovely silk comforter. :(

Now we're (hopefully) off to dreamland for a good 8 hours, and then off to The Great Wall tomorrow!

Vicky said…
Amy, love your pictures. So happy you have time to see some of the sights before your "gotcha" day! What a blessing to have your daughter with you too!
August 10, 2011 at 1:47 PM

Roseann D said…
Gracie didn't love real Chinese food? That is funny! Have fun at the Great Wall, and we are eagerly awaiting your next post!
August 10, 2011 at 3:23 PM

quilt'n-mama said…
Sounds like you had an awesome day! Have a blast tomorrow at the wall... one of my favorite places to be, it always amazes me!I am just about ready- heading to the big city to catch my flight in about 6 hours.
August 10, 2011 at 11:38 PM

Martha said…
There's a lot of stairs and climbing in China for sure....isn't it amazing that our Savior came all the way DOWN here for us????? :)