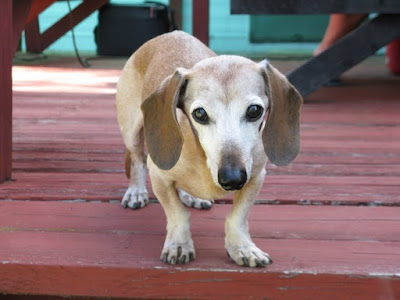 I just wanted to share some news with you all as I cannot form the words verbally without breaking down. As you all know our beloved Griffey has had a heart murmur since he was a puppy and up until a few months ago has done just fine. However the last few months Griff has struggled with some congestion in his lungs due to his heart condition. We have had him on medication since then.

Labor Day weekend at Griffey's favorite place of all time, Griffey had a stroke after being his normal feisty self with Scott and Ruth's new puppy Maya. It was merely Griffey getting riled up like did with every other dog only this time it was more than his little heart could take. (Ruth and Scott know about his heart and know it was not Maya's fault in any way) Anyway as I sat there in the grass that summer evening with Griffey I felt it in my heart for the first time that the poor little guy couldn't go on like that. Additionally, I feared he was dying at that moment. His eyes were non responsive and his breathing was very shallow. However, I was strangely at peace as he was in his favorite place of all time (the lake), doing what he did best (bark at bigger dogs). But slowly, as I pet him he came back. First his breathing, then his eyes, then his body. In typical Griffey fashion, he would only stay still in the chair in the lake trailer for about 20 minutes. Soon after he was jumping down and doing his thing again. Go figure.

Since then we have noticed his congestion episodes getting worse and knew we had to do something soon. It's one of the hardest things I have ever thought about in my life. Well, last night as I was getting in some late Fall golf with Gracie, Amy called and told me that Griff had another stroke while outside at our house. It was at that moment that I knew it was time.

Today, I called and Dr. Andy Broaddus was very comforting and said he could do it next week or today. I could not bear to think about it for the weekend and the days to come so I made the appointment for noon today.

I just returned from putting our beloved Griffey to rest. It was one of the hardest things I have ever done, but I have to say that Dr. Andy was awesome. I got to hold Griffey while he went to sleep and although it was excruciatingly hard, it was very peaceful and comforting. He literally went to sleep in my arms. I am so thankful for Dr. Andy and how all worked out today. I'm very sad and I miss my Griffey, but I am comforted that he is hurting no more.

We covet your thoughts and prayers,