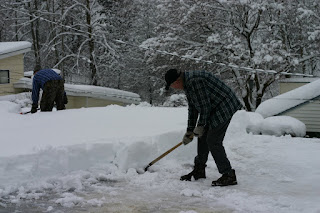 After another 6" overnight dumping of snow, school was cancelled once again. I was actually up at 6AM shoveling the new snow and had come in to get ready for school when I noticed I had a couple phone messages. After eating breakfast, I decided to go out and do some more shoveling. When I got outside, I noticed 2 of my neighbors were having their roofs shoveled. One of my neighbors, George Gaylord has a flat roof, and he was getting help from Steve Croston. I offered my help thinking I would be doing the same thing on my house anyway. With 2+ feet of snow on most roofs any more coupled with any type of warming in the weather could cause some problems. So after we finished George's roof, I trucked over to my house and started shoveling/pushing furiously. By 10AM the temperature had risen considerably and my body was getting tired which made the snow seem heavier by the minute. By 3PM I had the roof shoveled, and had re-shoveled the 8 foot piles of snow on the ground away from the house. The forecast calls for more chances for snow accumulation so things don't seem to be letting up. Click here to go to the handful of pictures I took as we were shoveling this morning.

Today was a great day! Gemma got a good night sleep again last night...whew! No tears today, either. Thank you, Lord! We had a lazy morning. Ate a good breakfast (these breakfasts are going to be the death of me! Seriously! I don't eat this well at home!!), fed the koi with a little more vigor today, and swam in the pool for almost 2 hours! Oops, I forgot to put sunscreen on Gemma and myself. Got a little red...my bad. But she liked the kiddie pool, so we'll probably do that again tomorrow. It's so hot and sticky here. Even with no sun, it's HOT! Gemma is coming more and more out of her shell. She's still pretty quiet during the day, but she's playing more and more. Today she kept looking to me for approval and even with an impish little grin on her face when she was doing something silly and she wanted me to notice. She saw a picture of our family, and she pointed to Simon (baba) in the picture, and then she pointed to Simon in real life. She doesn't say
Read more